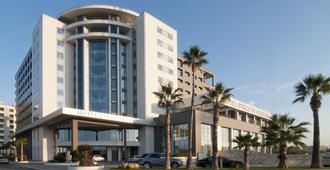 Posición n.º 4
Parco dei Principi Hotel Congress & Spa
8,0
Excelente 8,0
Basado en 2.106 comentarios
Detalles
Opiniones
$504.010
Ver oferta
Best Western Hotel La Baia
Ver todos los detalles
Limpieza
8,5
Confort
8,1
Ubicación
8,2
Servicios
7,9
Personal
8,9
En general 8,0 Excelente
Basado en 1.239 comentarios
Todas las opiniones
Limpieza
8,5
Confort
8,1
Ubicación
8,2
Servicios
7,9
Personal
8,9
Aceptable 4,0
Ventajas: a pesar de estar a 2 Km del aeropuerto, de noche es casi imposible de encontrar
Desventajas: la decoración y el desayuno
Aceptable 4,7
Ventajas: close to the airport
Desventajas: hard to find, hotel sign not clear from the street
Bueno 6,0
Ventajas: location near airport and vicinity to the sea. also good access to highways to Bari and other parts of Italy
Bueno 6,0
Ventajas: Hotel staff were extremely friendly and helpful. We only stayed 1 night, but liked the location near the sea.
Desventajas: Not the hotel's fault, but we drove there from the airport in the dark and, despite it seeming to be close, it was extremely hard to find. The breakfast, though served in a room with wonderful sea views, was very poor.
Bueno 6,0
Ventajas: The staff were friendly and helpful and there is a lovely restaurant at the end of the road to the sea and just to the left, called Paradise - very good food and not expensive. The private beach was good too.
Desventajas: The hotel promised a transfer bus to/from the airport at 8 Euros but it did not run on either of the days we needed it, so we had to use a taxi instead which cost 17 Euros each way. The hotel also promised 24 hour free tea and coffee brought to your room, but when we asked for it at 10.30pm we were told they had no tea and that we had to go to reception to get the coffee. When we came to check out they had the cheek to try to make us pay for the coffee because it hadn't been brought to the room so didn't count as free!
Aceptable 4,7
Ventajas: la proximidad al aeropuerto y la sala donde se sirve el desayuno.
Desventajas: La habitacion tenia mal olor y no era muy comfortable
Aceptable 5,3
Ventajas: The location closed to the industrial aera , the terrasse for a breakfast facing the sea ,and possibility of taxi transfert
Desventajas: room on the ground floor too much noisy due to the traffic road. Not acceptable for such level of hotel.
Aceptable 5,3
Ventajas: Amabilidad del personal
Desventajas: Bastante antiguo, necesita una puesta al día de las instalaciones
Bueno 6,0
Ventajas: Clean, easy access to airport
Desventajas: $review.cons
Aceptable 4,8
Ventajas: Location. No minibar but they did not let me pay four bottles of water I took during the night from the front desk. Very kind staff
Desventajas: The rooms were very poor, more likely 1-2 star hotel
Bueno 6,4
Ventajas: Good service from the reception staff who spoke some english. Clean comfortable room. Limited choices in the restaurant, disappointed with the condition of the beach area nearby and I had expected to find more restaurants etc but there was very little to do outside of the hotel. However very close to the airport.
Desventajas: $review.cons
Aceptable 5,2
Ventajas: The clening of the room. The staff is friendly.
Desventajas: The breakfast is very poor. The room was very noise, because of the street and the thin walls. No internet wireless connection for free. Too expensive rate.

Posición n.º 7
Hotel Palumbo
8,0
Excelente 8,0
Basado en 433 comentarios
Detalles
Opiniones
$244.369
Ver oferta
Villa Del Mar
Ver todos los detalles
Limpieza
8,8
Confort
8,5
Ubicación
7,2
Servicios
8,3
Personal
8,7
En general 8,0 Excelente
Basado en 252 comentarios
Todas las opiniones
Limpieza
8,8
Confort
8,5
Ubicación
7,2
Servicios
8,3
Personal
8,7
Bueno 7,0
Ventajas: La instalacion
Desventajas: El acceso
Aceptable 4,7
Ventajas: Clean and comfortable
Desventajas: Difficult to find. Nowhere nearby to eat. We were recommended a very over priced restaurant which turned out to belong to the owner's husband. We were left without taxi to the airport and it was impossible to contact the owner , even with cellphone number. The 6th passing car stopped and kindly took us to the airport.
Mediocre 3,3
Ventajas: Even dont know from what to start... The location is awful! If you dont have a car or if you gonna leave car on the parking, this hotel is not for you! Yes, it's 500 metres from sea but (!!!) there's no beach in that place and the seashore is rocky! Also there's a speedway near the hotel. So when you gonna go to the center by bus it's ok but when you come back from the center you have to pass the overpass which is in 100 metres from bus stop and if you come back in the night it's absolutely dark there and quite scary. It took about 30 minutes to get to the center from hotel (on the back way +10 minutes to pass the overpass). When we came back in the 1st day to the hotel from the city, we discovered that our room didnt tidy up.
Desventajas: We carried out the rubbbish by ourselves. Breakfast was too poor for that price. There wasnt any chioce in juices, there wasnt any yougurt, no muesli. The staff almost dont speak english. When I asked to call a taxi I was given a telephone number and had to call by myself. Too expensive for such conditions
Aceptable 5,7
Ventajas: Renewed on 2009. Room was spacious, with big screen TV. Villa/hotel was clean and the staff/owners were friendly. Wi-Fi was good. Italian breakfast (Cappuccino, croussan, jam and toasted bread). Easy to reach by main highways, and close with Bari center, airport or port. Parking as well with no charge.
Desventajas: No elevator, and no support staff to help you lifting luggage in upper floors.
Aceptable 5,7
Ventajas: friendliness of staff when they were there a quiet and fairly secluded place even if close to the highway free and working Internet access
Desventajas: almost no breakfast bad location if traveling without a car
Aceptable 4,3
Ventajas: Room looks good and it's clean and comfortable, hotel staff is nice
Desventajas: Very far from the city center next to a big road (its between the house and the sea also) that is why it noisy, and you can not reach the sea there.Teracce has no equipment
Aceptable 5,3
Ventajas: El hotel es agradable. Y esta bien decorado, no esta mal .
Desventajas: No tienen servicio 24h , como pone en la página. Lejisiiiiimo del centro, esta en un pologono, sin coche no sirve de nada!!!

Posición n.º 10
La Nuit
0,0
Malo 0,0
Basado en 0 comentarios
Detalles
Opiniones
$210.004
Ver oferta
La Rosa Blu Bed & Breakfast
Ver todos los detalles
Limpieza
8,4
Confort
7,5
Ubicación
6,9
Servicios
7,1
Personal
7,1
En general 7,0 Bueno
Basado en 276 comentarios
Todas las opiniones
Limpieza
8,4
Confort
7,5
Ubicación
6,9
Servicios
7,1
Personal
7,1
Aceptable 5,3
Ventajas: The bed was really comfortable and big. The whole room was completely new, so everything was nice and fresh. The location was near the sea, however not for swimming. There were restaurants in the neighbourhood.
Desventajas: The b&b was really hard to find because it was in a closed community, very weird location for a hotel. It appeared to be a house of an older couple and they had made a few rooms for guests in the cellar. The room was in the cellar part of the house of the owners, so there was not a lot of light. Only a small strip of windows about 30cm high. Also there was no ventilation in the room, only in the hall so that it got really muggy at night. There was AC in the hall, but we didn't want to leave the door to the room open! The bathroom had a very low ceiling, being 1.90m long I could just stand up straight in the shower. There was only a small hole in the ceiling of the shower to the garden for ventilation. Breakfast we had early because we had take an early flight home. Therefore, the bread was really dry (the owner apoliogised that it was too early to buy fresh bread, but I thought, what about the freezer??). We got a boiled egg, cream cheese and jam, that was it. So very simple. The lady couldn't speak a word english. 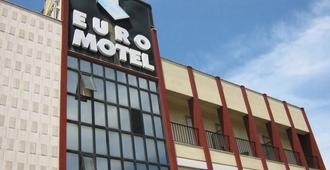 Posición n.º 13
Hotel 7 Mari
0,0
Malo 0,0
Basado en 0 comentarios
Detalles
Opiniones
$202.368
Ver oferta
Hotel Terranobile Metaresort
Ver todos los detalles
Limpieza
8,1
Confort
8,0
Ubicación
6,8
Servicios
7,5
Personal
8,2
En general 7,0 Bueno
Basado en 172 comentarios
Todas las opiniones
Limpieza
8,1
Confort
8,0
Ubicación
6,8
Servicios
7,5
Personal
8,2
Bueno 6,3
Ventajas: NIce setting. Corresponds to Booking's customer's commentaries.
Desventajas: A triflle difficult to find, even with a Tomtom. They should advertise in the sound barrier panels confronting the road.
Excelente 8,0
Ventajas: magnificent !!!!
Desventajas: It is very difficult to find the hotel. They must put signs to guide in the hotel
Excelente 8,0
Ventajas: Very friendly and helpful staff, excellent rooms, very pleasant swimming pool, luxury restaurant. Convenient parking places. Available internet connection. We had everything.
Desventajas: A bit far from city center, but we had the car and didn't wont to go to the city in the evening - so it wasn't a problem for us. But you must know that it's impossible to go to the centre by foot, it's about 7-8 km.
Aceptable 5,7
Ventajas: This hotel offers very nice and romantic accomodations, has a large garden and a large swimming pool surrounded by olive trees.
Desventajas: The menu in the restaurant and wine selection are very poor and not compatible with the quality of the hotel. Puglia has wonderful wines and food!
Bueno 7,6
Ventajas: Its quiet, comfortable and very relaxing. It is not a sterile modern hotel, but has retained its character while providing all mod cons. The sunken beds in the pool are ideal. Although location does not seem the best I do not regret having chosen this property having seen where other comparably priced four star hotels located..
Bueno 6,0
Ventajas: very relaxing and staff (male staff) was very kind and polite.
Desventajas: far from the centre and location is near busy road...so you need a car.
Excelente 8,0
Ventajas: Todo fantástico!